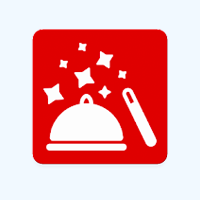 With Rezeptzauber, you can find countless recipes, plan entire menus, and create corresponding shopping lists with a few clicks . Rezeptzauber not only generates a shopping list as if by magic, but also adds ingredients together in different quantities. So you never have to figure out how much a pinch of salt plus two spoons of salt will make! Recipes from well-known portals such as Chefkoch.de or Eatsmarter.de can be imported at the touch of a button.